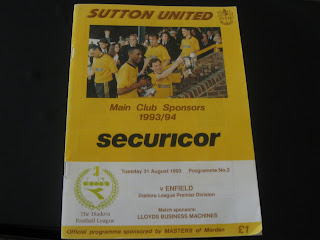 Tony Rains and Matt Hanlan have gone down in history as the scorers of the most famous goals at Gander Green Lane to knock first division Coventry City out of the FA Cup in 1989.

Most of the Enfield fans present on the evening of the 31st August 1993 will argue the case that Graham Roberts holds that record. The Cold End had 'bunked off' school for the afternoon to get to this game. 'Bunked off' is a bit of lie actually, I was in the sixth form at the time so most of that year was spent outside of school. This match will always go down as the game with goal that should of been scored by Mark Pye.

Enfield went into the game with a terrific starting record to the season of wining 3-0 at Carshalton Athletic followed up by home victories against Dorking 6-0 and Harrow Borough 2-0. Sutton United had drawn 0-0 at home against to be crowned champions Stevenage Borough and won 4-1 away at Bromley and then played Molesey away on 28/08/1993 which I can't find the result for.

This was season when Graham Roberts and George Borg were in charge of Enfield and they took to the pitch wearing the famous 'tesco' carrier bag kit.

The match was eventful but pretty level with ex-Sutton United keeper Gary McCann quite busy in the E's goal with his counterpart ex Brimsdown Rovers keeper Fitzroy McCaulsky in the Sutton goal making saves from Paul Hobson and Darren Collins. There were lots of chances and it was surprise it stayed goalless for so long.

The 71st minute will be remembered by Mark Pye as the goal he should of scored. Making his full debut for the E's he collected a through ball from Collins and rounded McCaulsky, then with the goal gaping and with no Sutton dfender near him his shot from the edge of the box hit the left hand post. Pye stood with his head in his hands - A miss of Ronnie Rosenthal proportions.

Supporters of both sides would of settled for 0-0 and thought it was going to be one of those days when Ollie Morah's shot was blocked on the line by Pat Ryan and Greg Heald was very lucky not to give away a penalty bringing down Morah in the box.

The deadlock was broken on 86 minutes when Morah put over a cross from the right hand side for David Jones to sweep past McCann to make it 1-0 to Sutton. United's fans mocked us E's fans behind the goal as they thought they had won the match as the game drifted into injury time.

Injury time drifted on and on with most E's fans waiting for the referee to blow to signal a defeat. In about the fifth minute we got a free kick just inside the Sutton Half. Paul Hobson lifted the free kick into the box for Graham Roberts to head home and make it 1-1. This set delirious wild scenes of celebration and joy behind the goal from E's fans and players alike, Roberts ran to celebrate with us and accidentally headbutted a well known E's supporter, friend of the cold end and future Town supporter. We'd only drawn 1-1 at Sutton United but this was what football was all about. We'd scored a late equaliser against the odds and it was brilliant!!!

Enfield's side that night was:


Footage of the goal by Graham Roberts and celebrations behind the goal. Excuse the poor quality but the cold end is a computer novice.

Footage courtesy of Hughes Video Services. Please click on the link to access the extensive library of Enfield, other non league games and compilations. Excellent memories and great value for money.
http://www.hughesvideoservices.co.uk/
at 10:56