Classic Away Days Part One 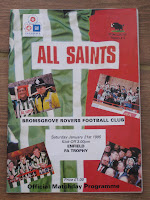 Thinking back to the glory days of the mid 90s following Enfield FC mostly all the matches that stand out in my memory are away from home in the FA Cup or FA Trophy.
What fantastic memories of standing side by side with fellow E's fans out singing the home support with choruses of 'George Borg's blue and white army' or 'givvvveeee usssss annnn eeeeee!!!'. The Cold End's personal favourite was and will always be 'time flys by when your the driver of a train....'.
With this in mind TCE presents part one of classic away days looking back at the FA Trophy First round tie at then Conference side Bromsgrove Rovers on Saturday 21st January 1995 (over 14 years ago!!!).
We took two coaches up if I remember correctly and they left Southbury Road for the journey up to the West Midlands at about 10am. On the way the weather was terrible with torrential downpours and listening to Radio Five reporting of mostly all football games being cancelled due to water logging got everyone on the coach talking and worried the journey would be a waste of time.
Luckily, when we arrived I remember taking a peek through the fence at The Victoria Ground and saw the pitch (due to it being on a slope) was in a playable condition. Other supporters confirmed the game was on, one of the only surviving games of the day.
I was 18 years old at the time and had just taken up (legally) drinking in pubs so it was off to the nearest watering hole for a few pre-match beers.
Over an hour later we entered the ground and saw the end where the E's were shooting was open and the very strong wind was blowing Bromsgrove's way. For the first half an hour they were all over us and deserved their 1-0 lead. We equalised from John Bailey (it was really an own goal wasn't it) and went in at the break 1-1.
Then the heavens opened causing the Bromsgrove fans to stay put in the covered end for the 2nd half next to us which created a great cup tie atmosphere. George sent on The Saint in a one of his many genius tactical changes and for the next 45 minutes it was like watching Brazil. TCE thinks even the South Americans would of struggled to play against John Richardson's mazzy runs that day on the pitch which was cutting up in the rain.
I sang my heart out and after Andy Kerr nodded us in the lead the game looked safe. When The Saint knocked in the third after cutting back it was mayhem behind the goal. "We're on the march with George's army..." over and over...We were on our way to Wembley.
The best chant which sticks in my mind was the E's fans (reply to Bromsgrove's chants of "We hate cockney's") "We hate scousers and we hate scousers" causing numerous shouts of "we're not scouser's we're brummies".. Oh the irony!
After the coach journey back I spent the evening in the bar getting royally drunk, stumbling home at about midnight. What a day!!
Great memories like these is why we all love the non-league game; Some people I know went to Wembley at the weekend paying £50+ to watch a pre-season friendly sitting on a plastic seat whilst paying £4+ for a pint of flat lager in a plastic cup, not forgetting Burger and Chips for £7 +. Give me an away cup tie in the early rounds of the cup over that anyday.
Please Steve, Del and the players give the Town a good cup run this year.
EFC's team that day was Andy Pape, Gary Blackford, Super Jimmy Carstairs, Paul Turner, Andy Kerr, Mark Pye, John Bailey, Paul Hobson, Gary Abbott, Al-James Hannigan and John Richardson. Subs - John Ridout, Martin St Hilaire (on for AJ at half time) and Les Cleevely.
Crowd - 1,439.
at 20:24