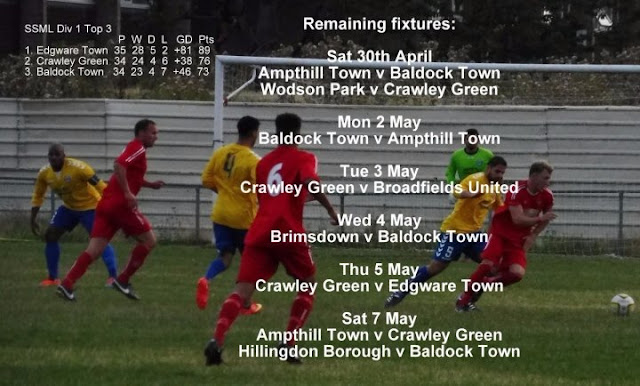 Edgware Town's magnificent 0-5 win at Codicote on Tuesday evening won them the Spartan South Midlands League Division One title and with it promotion to the Premier Division - The Wares can now relax in their final three games especially in tomorrow's home game versus Arlesey Town Reserves after which they will receive the trophy. They could still have a say in which other teams gets promoted as they travel to potential runner's up Crawley Green on Thursday evening. The other side involved is Baldock Town who are in third place three points behind Crawley Green but with a much better goal-difference. Both have four games to play over the next week with Baldock's website putting out a rallying call for the people of the Town to get behind their team in the race for promotion. The game on Bank Holiday Monday is a 10.30am KICK OFF so if you are local why not get along to support The Town and join The Red Army. The following is taken from www.pitchero.com/clubs/baldocktownfc which shows that Baldock have made up an incredible 17 points on Crawley Green since early December -


"The SSML Division One promotion race boils down to four matches in a week for both Crawley Green and Baldock Town.

Town trailed Crawley Green by 17 points in early December, but some hard graft and excellent form has seen us whittle that deficit down to just three points. Our superior goal difference could also come into play.

Whatever happens though it will have been an exciting finale to what has been a season of progress for Luke Gregson's Baldock Town side.

Ampthill Town could hold the key in the final week of the season with Baldock set to meet them away and at home in the space of three days, whilst Crawley Green must visit Ampthill Park on the season's final afternoon.

We are reaching out to the people of Baldock - if you choose one more football match to visit this season - make it your local club's final home game of the season on Bank Holiday Monday - 10.30am Kick Off.

Luke and the players need your backing to force their way into the top two."