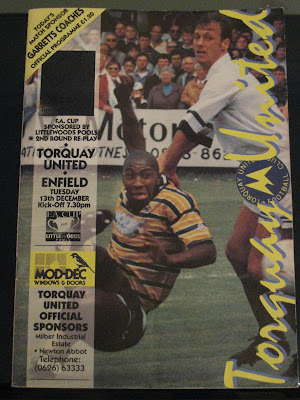 The recent FA Cup first round and forthcoming second round draw pitting non-league minnows against their more illustrious league giants brings back some marvellous and very fond memories of the great FA Cup runs the old Enfield FC had.
None more so was the campaign of 1994/95 when led by George Borg we started off in the First Qualifying Round beating Hemel Hempstead Town, Purfleet, Ruislip Manor, St Albans City and then league side Cardiff City at Southbury Road setting up a 2nd Round tie with another league side in Don O'Riordan's Torquay United. It all looked to be going wrong when the league side went 1-0 up in the first minute through Barbadian International Gregory Goodridge but thanks to one of the world's most well known sellers of fine fruit and vegetables Gary Abbott (Martin Fowler must have a claim to be the most famous and prior to him Pete Beale 'Awight treacle') making it 1-1 it was an exciting midweek trip down to the West Country with a possible glory trip in the third round to Premiership Leicester City.

There were three supporter coaches which made their way towards Devon along with various cars and minibuses carrying the vast army of Enfield FC supporters. I remember my coach not having any toilet facilities so numerous bottles were filled whilst driving on the motorway as a few pints had already been sunk in the bar prior to us leaving if memory serves me correctly.

Torquay were doing okay in the league so it was going to take an immense effort from the team to get a win at Plainmoor. Prior to this game their last home game was a 0-0 draw versus Wigan Athletic in front of 2509.

Enfield fans were placed in the open end of the ground exposed to the elements with the vocal Gulls fans to side terracing banging their drum constantly throughout the match.

The crowd of 3174 saw a brilliant game where Enfield at times heroically defended with Legend Andy Pape back to his ultimate very best between the sticks and Martin St Hilaire 'wooshing' the Torquay defence outclassing and outpacing them numerous times.

It was a horrible night weather wise and it rained on and off throughout the match, this didn't stop us singing our hearts out. Blue and white balloons and the Union Jack flags with ENFIELD FC emblazoned over them were waved and displayed as the travelling support enjoyed the magnificent and historic occasion.

It was quite a level match when just before half time Saint went on another run 'wooshing' yet another defender and ran with the ball towards the right hand corner flag. The advancing Torquay keeper Ashley Bayes slid in on the wet pitch and took Saint out. Looking back the foul wasn't nasty and definitely didn't stop a clear goalscoring opportunity. Referee Mike Reid didn't see it this way and brandished a red card sending off Bayes. To say the home fans were not impressed with the decision is a bit of an understatement and when forward Goodridge was replaced by sub goal-keeper Adrian Tucker they were not happy with their manager O'Riordan.

Into the 2nd half and it was Paul Hobson who sent a brilliant free kick into the box from the left hand side for Disc-Jockey Andy Kerr to rise above the home defence heading the ball past Tucker and putting us 1-0 up. Scenes of manic celebration and joy on the away terrace followed with 'time flys by when your the driver of a train...' drowning out the Torquay drummer.

Torquay hit the cross-bar shortly after through Kevin Hodges and England's number one Andy Pape produced a world class save from substitute forward Duane Darby.

It was then Gary Abbott who was never a nasty player despite being kicked to pieces regularly in the Isthmian League had a moment of madness and kicked out at a Torquay player who had hold of his leg. Referee Reid showed no hesitation in showing the red card again which was the catalyst to a melee and a bit of pushing and shoving between the opposing sides.

The last ten minutes seemed to last a lifetime as the ten men of Enfield defended and defended and defended against the rapidly advancing ten men of Torquay who laid siege to the goal at the open end of the ground where we were situated. When Reid blew the final whistle we all went mad. Two league teams beaten and we were off to Filbert Street. The celebrations between players and fans is a brilliant memory of a fantastic night following Enfield FC. A real 'glory glory' night that I am proud to say I was there alongside the other loyal fans and supporters.

Sitting on the coach awaiting to leave still celebrating one moronic Torquay 'supporter' who must of been about 40 banged on the back window and offered us out for a fight. He was swiftly laughed at and 'we're going to Leicester. we're going to Leicester, your not' sang towards him. The idiot should of known better and couldn't take the fact his team had lost against the then kings of non-league football - Enfield FC.

As a result of Abbott's red card he was banned from playing in the Leicester City game. I can't help thinking in a game we lost 2-0 if only Gary was playing we may well have got a result at Filbert Street!!
at 21:14