COMEDY OWN-GOAL THE HIGHLIGHT ON A CHILLY EVENING AT BIRCHWOOD

Hatfield Social (15th position) and Sandridge Rovers (8th) played an early evening Hertfordshire Senior County League Premier Division game yesterday evening at Birchwood Leisure Centre. The game was scheduled to kick off at 6.30pm but actually got under way at 6.37pm with 36 minutes and 35 minutes being played in each half along with a 7 minute half time break. 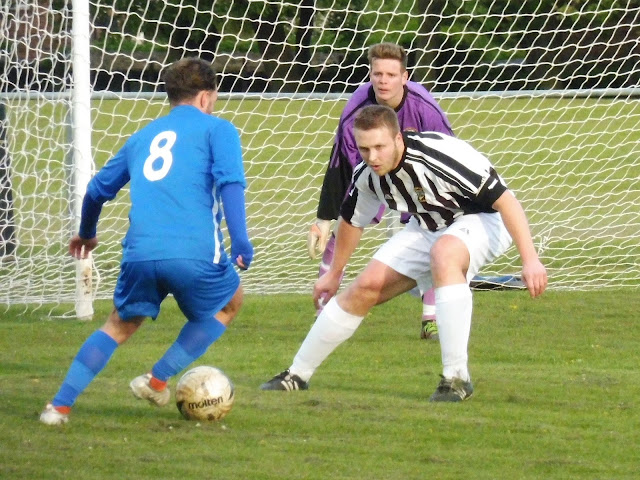 On a bumpy and hard pitch this was a competitive game with some strong tackles going in from both sides. Rovers took the lead via an early comedy own-goal when a cross from the right hand side was put into his own net when under no pressure by a Hatfield defender. It was all square just before half time when the ball was laid back just inside the box for Hatfield to score a well taken goal. 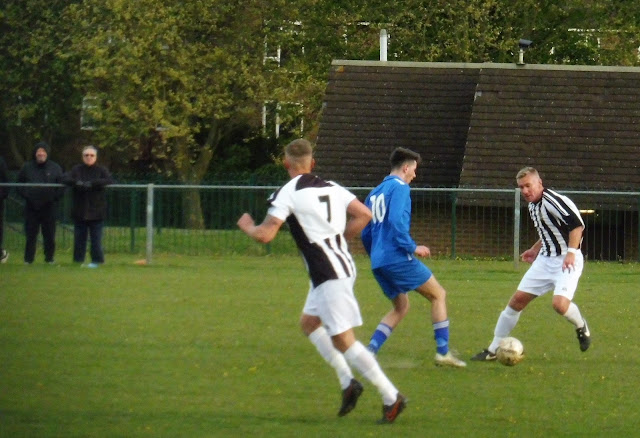 The Sandridge Rover's boss wasn't happy and gave his team's performance and in his half time team talk conducted on the pitch he stated his team were 'static' and it was 'worse than Saturday' when they had lost 5-1 at Standon and Puckeridge.

A GOOD CROWD FOR THE HERTFORDSHIRE SENIOR COUNTY LEAGUE GATHERED AT BIRCHWOOD LEISURE CENTRE FOR THIS MATCH
The second half didn't see any real clear cut chances created bar a late effort from Sandridge effort which was well tipped over the bar by the home side's keeper. The final score was 1-1 and for an early evening HSCL fixture this was well attended (especially as it was rather chilly for an April night) with around forty people watching from various sides of the field.

The London Lions have run away with the Premier Division title and were confirmed champions a number of weeks ago - they are currently 23 points ahead of second placed Bovingdon with just one game to play at Ware Sports on Saturday.

They get the the chance to complete a treble on Monday 1st May when they take on Letchworth Garden City Eagles in the final of the league's famous Aubery Cup competition at Rowley Lane. They have already won the Hertfordshire FA Senior Centenary Trophy.

In Division One the title is still up for grabs with FC Lemsford, AFC Oaklands, Broadfields and Bengeo Trinity (albeit an outside chance) in with a shout of finishing first.

The final day of the season is schedule for Saturday 13th May when FC Lemsford host AFC Oaklands - Could this be a final day title decider?

In the Reserve and Development division it's a race between Bovingdon Reserves and Hadley 'A' to see who takes the title with three and four games left to play. Bovingdon Res play Sarratt Res in the Reserve Cup Final tomorrow evening - the game takes place at Wodson Park.

Social end their season with a trip to Cuffley on Saturday with Sandridge Rovers travelling to Evergreen before a midweek home game against Belstone and a final trip to Bushey Sports Club on Saturday 6th May.
at 14:15