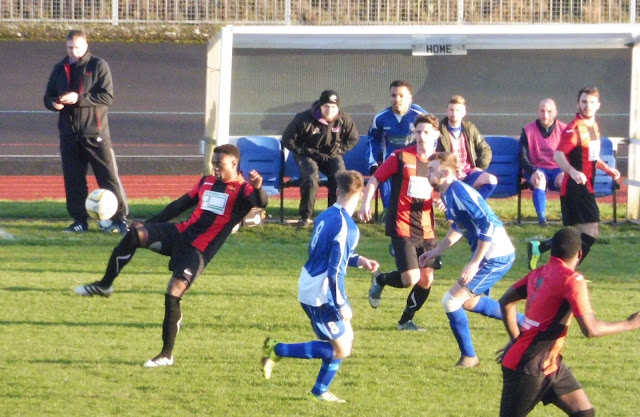 Codicote FC returned to their former temporary home at The Gosling Stadium on Bank Holiday Monday to face Hatfield Town in a Spartan South Midlands Division One local derby. Both sides are struggling towards the wrong end of the table this season with Codicote playing well in their previous game which ended in a 0-1 defeat at Baldock Town and Hatfield Town losing 5-1 at table topping Harpenden Town.

Aside from the defeat at Rothamstead Park The Blue Boys had seen a up-turn in form of late recording a decent 0-1 away win at Hadley Wood and Wingate in the Division One cup followed up by two impressive aways wins - a 1-5 victory at Arlesey Town Reserves and a 1-3 win at Winslow United in their three previous games prior to Christmas. The two league victories were only their third and fourth of the league campaign for Kevin Pearman's side so far. 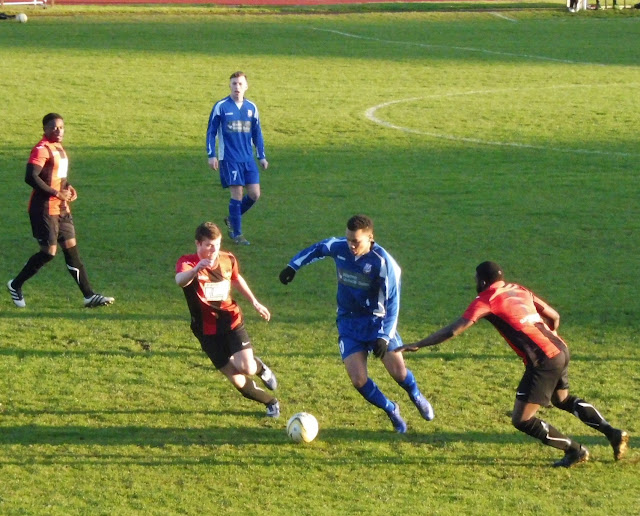 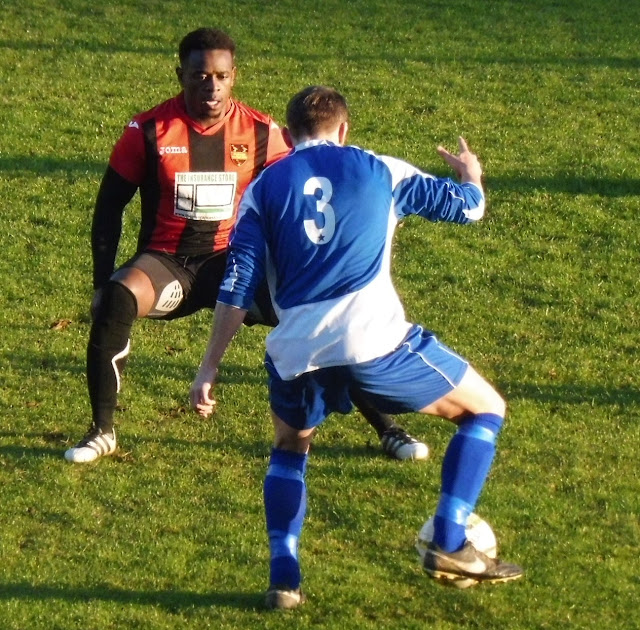 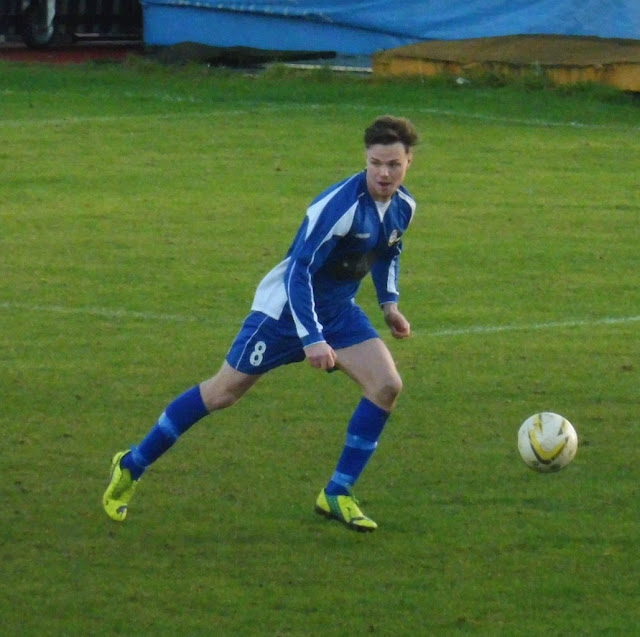 In front of thirty-seven hardly souls the home side looked the brighter in the first half with Darren O'Brien looking particularly sharp up front - he had scored six goals in five starts and one sub appearance prior to this game. Two good saves from Andrew McEuan kept Hatfield out whilst up the other end Alfie Barker scored for Codicote from close range some what against the run of play. More about Barker below.
The second half saw Codicote step up with Reggie Ross really standing out - he created two good chances to score with sublime and superb pieces of individual skill and brilliance which I would describe as 'Ronaldoesque' if there is such a word - if there isn't there should be!! See from 4m 55secs and 7m 0secs on the video - it's well worth a watch.

Two late goals put some gloss on the victory for the away side with Barker scoring the second and Marc Arnott getting the third. It was The Cod Army's fourth away victory in twelve away league games this season. Former Hatfield Town player Sean Mboto came on as substitute for Codicote - He started 10 games for The Blue Boys earlier in the season.


The victory was unfortunately overshadowed by tweets sent by Alfie Barker directed to AFC Bournemouth player Harry Arter on Tuesday evening during their game with Arsenal.  The story is covered here in full in an article published by the Daily Mail. Barker, 18, was on loan to Codicote from Evo Stik Southern Premier Division side and has been released from both clubs due to his actions. Codicote FC issued the following statement on Wednesday-

"Alfie Barker was registered with Hitchin Town but under dual registration came to ourselves and Langford FC.  Codicote FC adopts a responsibility to its social media outlets and expects the staff and players to do likewise.

In regard to comments made by the player of an irresponsible and anti social nature we have no choice but to terminate our relationship with him.

We would like to make it clear that Codicote FC cannot and will not tolerate this behaviour; we have a responsibility to our community, supporters and the Football family to stamp this behaviour out."


I have chosen to publish the highlights I filmed as I didn't want to let down the other players involved in what was a decent game of football. Although losing 0-3 I think The Blue Boys and their manager Kevin Pearman can take many positives from their performance especially the first half and hopefully have an improved second half to their season.

The crowd of 37 wasn't The Blue Boys highest league crowd of the season as 48 saw their game against Hadley Wood & Wingate. Their average for the eleven league games played at The Gosling Stadium stands at just 31. If you are a Hatfield resident why not pop along to one of their games even if they do play in Welwyn Garden City. They host fellow struggler's Bedford FC on Saturday before travelling to Langford next Tuesday evening for a huge Division One Cup Semi-Final clash. The winner's of that game will face the winners of the Harpenden Town v Wodson Park game played on the same evening.