THE TOWNERS ARE VICTORIOUS ON A MEMORABLE NIGHT AT THE HIVE 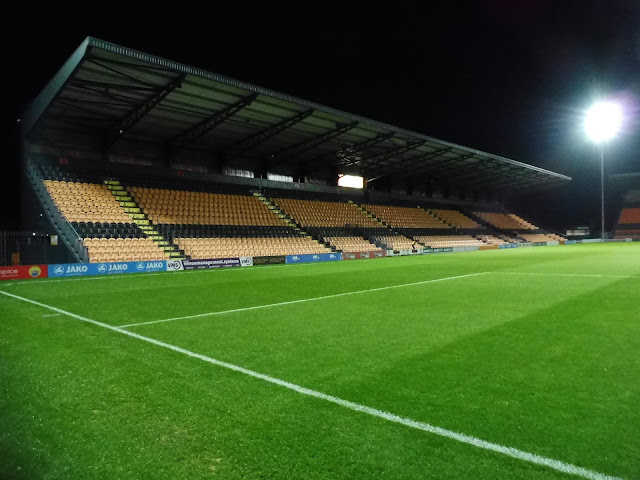 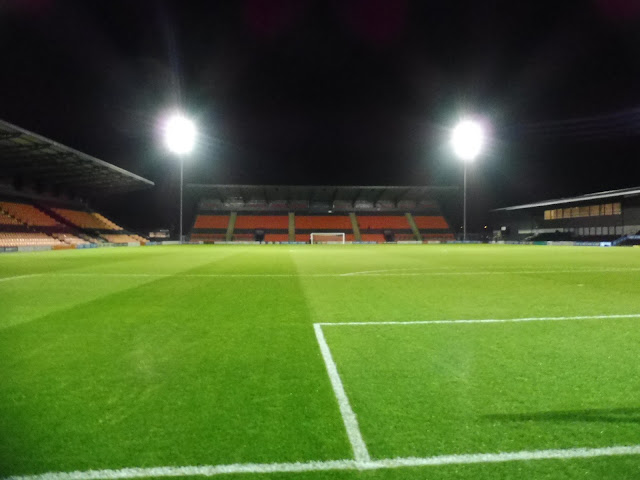 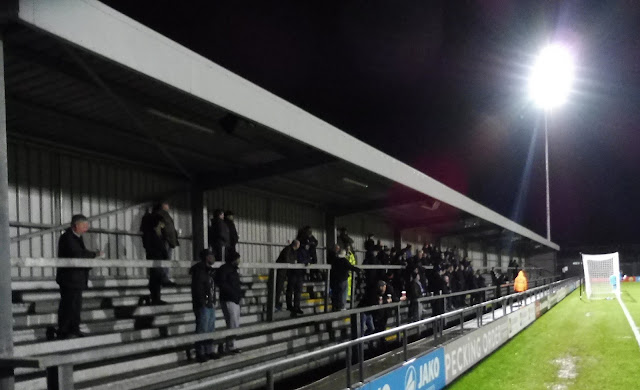 It wasn't the halcyon days of the Gola League and GM Vauxhall Conference games between Barnet and the old Enfield FC of the 1980s but Monday night was the first time a competitive game has taken place between The Bees and a team representing Enfield since the famous 1991 FA Cup Second Round game in front of over 5,000 fans along with John Motson and the Match of The Day television cameras at Southbury Road.

They say a month is long time in football so it's no wonder much has happened in the twenty-five years between the two games. To write about all that has happened will take a very long time so we'll keep it brief as below. 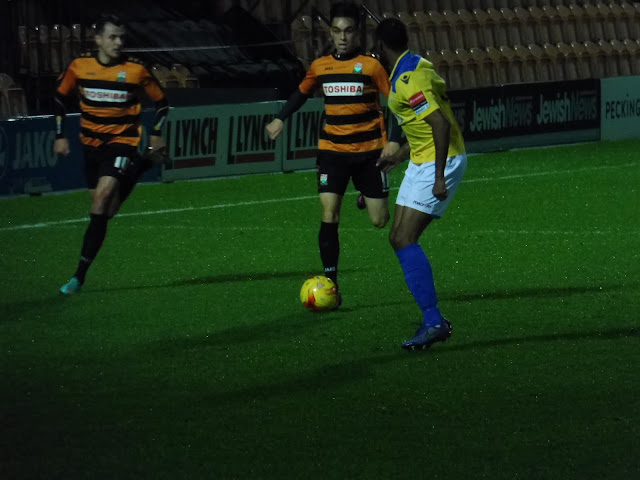 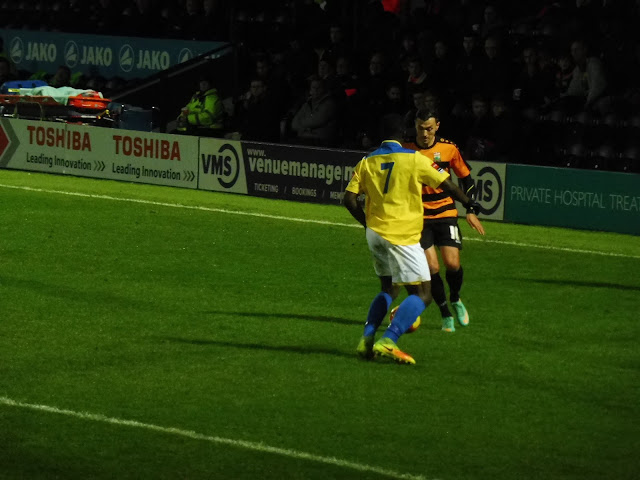 For football in Enfield we've seen the old Enfield FC lose their much loved Southbury Road ground and then the breakaway Enfield Town formed in 2001 with the original Enfield FC unfortunately folding in 2007. Enfield 1893 FC, formed in the same year, now play in the Essex Senior League with their 'home games' taking place at Harlow Town's ground.

For The Bees they have been promoted to the football league three times winning non-league's top division in 1991, 2005 and 2015. They have also moved from their home county and their famous Underhill ground with it's sloping pitch to their impressive ground "The Hive" in Edgware, Middlesex.

This Middlesex FA Senior Cup game was the first time Enfield Town have played at a football league stadium since they were formed in 2001 - the pitch at The Hive was in excellent condition despite all the rain that had fallen over the previous 24 hours so massive credit must go to the ground staff. 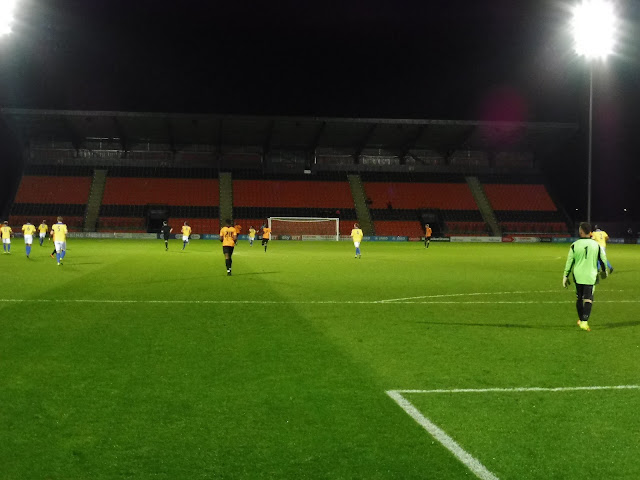 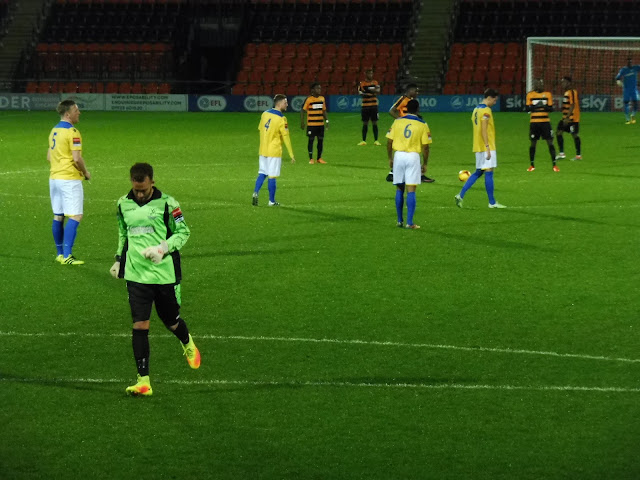 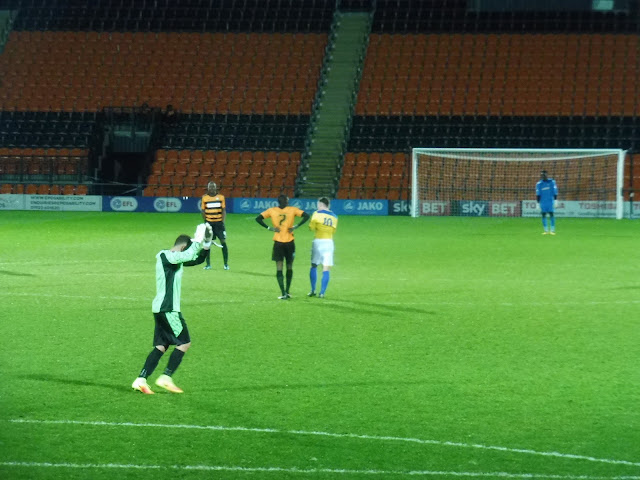 The Bees started with a development/reserve side as their first team are due to play away at Plymouth Argyle tonight in a League Two game with The Towner's starting with a strong team - Manager Bradley Quinton brought in Percy Kiangebeni, Tom Collins, Dernell Wynter and Keir Dickson to the starting line up with midfielder Scott Shulton starting in goal - Town had originally named ex Barnet player Ravan Constable as keeper but he was delayed in getting to the ground so Shulton was given the job and first choice keeper Nathan McDonald was drafted in from a well deserved night off to make his way to the game.

A good number of the home side had experience playing for the first team including Kai McKenzie-Lyle who had made some headlines in International football cricles of late. The 6ft 5inch player who turns 19 years of age at the end of the month represented Guyana's full squad in two Caribbean Cup games earlier in the year. In his first game against Suriname he scored a goal in the closing stages of a 2-3 defeat and he saved a penalty in his second game against Jamacia.

Right Back Dwight Pascal, only 15,  broke the record recently for Barnet's youngest ever first team player in a Check-A-Trade Trophy game against Peterborough United. Alie Sesay (born in Enfield) has played 13 times for the first team this season along with Fumnaya Shomotun, Wesley Fonguck, Nana Kyei and Alex Nicholls all with first team experience. Nicholls, 28, has made over 250 league apperances for Walsall, Northampton Town, Exeter City and Barnet.

Barnet were the better side during the opening twenty minutes passing the ball around confidently and keeping possession well. They had a good chance from a shot which grazed the outside of the post which I think Scott Shulton had covered. Shomotun, who has spent time on loan with Staines Town, was their stand out player - He played mostly the right hand side of midfield but is mainly left footed and created lots of chances for his team. From what I saw I would say the 19 year old has a very good future in the game and is a player who will excite fans with his skillful play, neat touches and pace going forward. 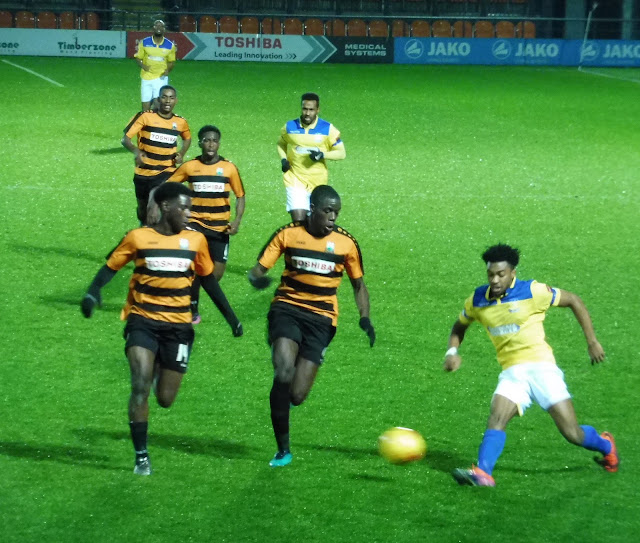 Gradually The Towners came back into the game with Tyler Campbell showing some good touches on the left had side of midfield. Dernell Wynter then scored a goal which will live long in the memory for him as he look the ball on a mazy run to the edge of the box and from around 25 yards out his dipping shot went over McKenzie-Lyle to make it 0-1 which was the half time score.

So much for his night off as Nathan McDonald came on for Scott Shulton after around 35 minutes. He was given a rousing reception from the travelling Town faithful for his brilliant cameo performance in goal and keeping a clean-sheet. "England's Number One" was belted out from the terraces as he jogged off the pitch. 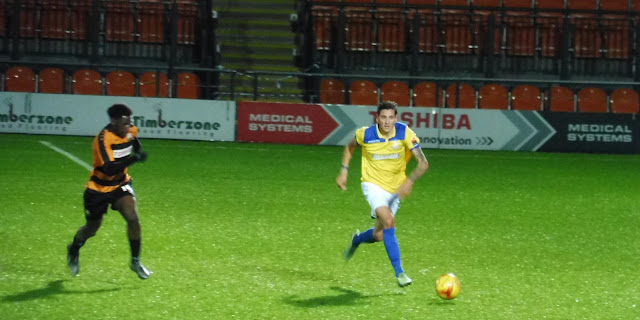 The Towner's doubled their lead in the second half when Harold Joseph stabbed home a corner kick from close range. Credit to the Barnet team who at 0-2 down could of put their heads down and played out the rest of the game - they didn't and came back into the game with close range efforts from Kyei and Fonguck. Left-back Joe Payne then scored a tremendous goal to complete their come-back - it was anything but from close range! McDonald off of his line had cleared the ball up field only for Payne to send it back from inside his own half and into the corner of the net. I think Scotty Shulton would of had it covered!!! 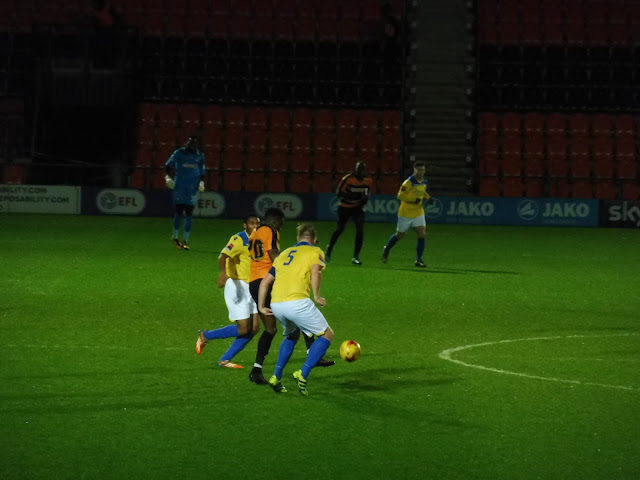 It wasn't all over though as Town showed some great character and fought back with substitute Bobby Devyne a constant danger on the left had side of attack. He was fouled on the edge of the box shortly after Payne's wonder goal with the resulting free-kick headed in by Ricky Gabriel to the delight of his team-mates and the fans behind the goal. Devyne could of won it in injury time when his close range header rattled McKenzie-Lyle's post. 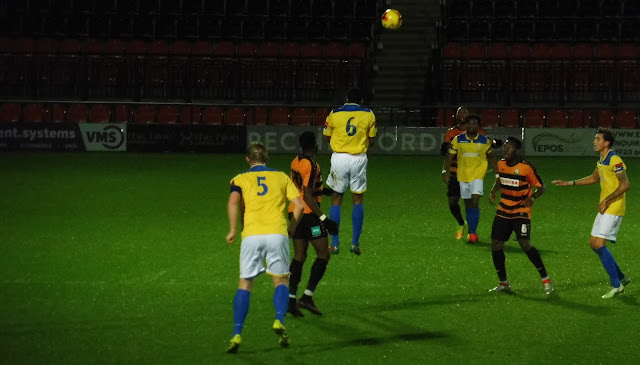 In a game which may have been looked upon by some as 'only the Middlesex Senior Cup' so it 'doesn't mean anything' you only have to look at the celebrations from both sides scoring their third goals - there is no doubt both wanted to win this local derby.

So after a highly entertaining 90 minutes of football the game went down to the lottery of kicks from the penalty mark.

Everyone was scored in the relegation penalty kicks making it 5-5. Former Bee Keir Dickson made it 6-5 to the Towner and then Nana Kyei's was well saved by Nathan McDonald to put his side through to the next round. 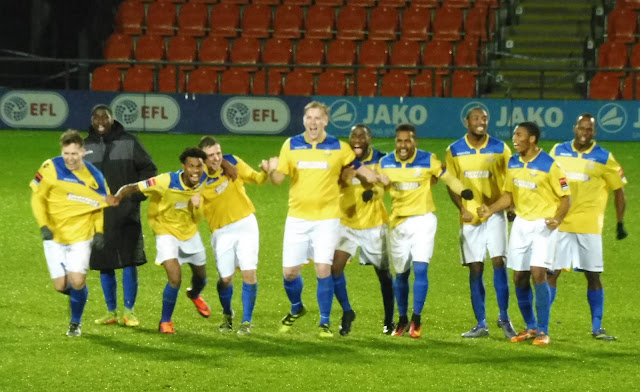 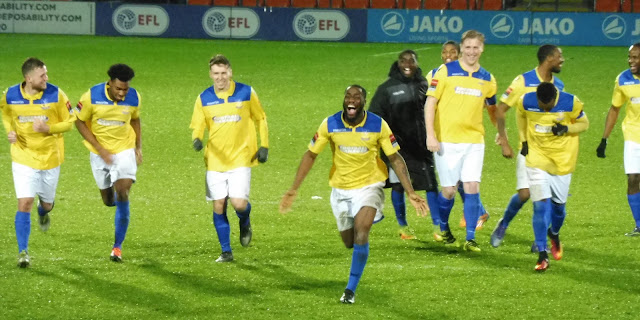