When local rival's Wingate and Finchley face Enfield Town the tackles always fly in from the start of the game and it was no different last night - after only five minutes there was some 'handbags' after a late challenge from Stanley Muguo. The Town Captain was booked along with Bobby Devyne and Wingate Captain Marc Weatherstone as a result of the incident. Both teams played some good stuff, on a surface (described by many on the night as a carpet) that the home side can be rightly proud of, passing the ball with fully committed performances in a somewhat feisty affair. Every player worked hard all over the pitch - A challenge Town defender Harold Joseph (playing against his former club) put in to win the ball was strong indication to the fact nobody wanted to lose.

It was the home side who had the best goal scoring chances in the first half and they took the lead through ex Towner Billy Heally who nodded the ball home past the dive of Nathan McDonald to the delight of the home supporters. The Town keeper was class throughout the game and made a number of important stops and saves to deny Wingate another goal.

With the half time score at 1-0 Town made a famous comeback in the second half. Corey Whitely (on as a substitute) played  Devyne in with what I think was his first touch of the game for the Town forward to place the ball expertly past Wingate keeper

Town played forward looking for the all important three points with much of their play going through front-man Harry Ottaway who put in another superb performance holding the ball up and bringing other players into the game. The physical battle between him and Wingate's centre back Tarik Moore-Azille was one of the highlights of the game for me. 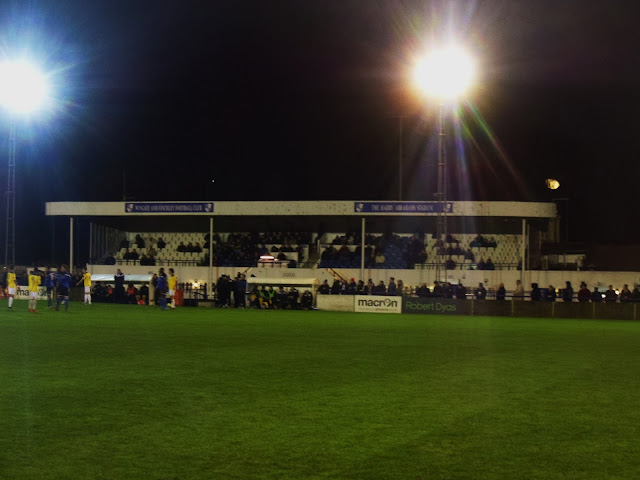 It was right on 90 minutes that Ottaway put a cross into the box that was knocked down for Claudio Vilcu to smash the ball home to some ecstatic scenes from the large group of travelling Enfield fans behind the goal who made up a large percentage of the 405 people in attendance.


Does it get any better for a football fan than a last minute winner away from home in a local-derby?

The win puts Town up into tenth place of the Ryman Premier Division table on 40 points which is just five points below fifth place - the final play-off spot. Wingate are currently in seventh place on 42 points. It was Town's fifth victory in their last six league games and their fourth away win in the twelve games they have played on their travels - three of those victories have come in their last four away games.

Wingate's form has dropped off of late - they have won two and lost four of their last six league games. They have some very good players and will, in my opinion, be up their in the race for the play-offs towards the end of the season where I also think Enfield Town will be too!! They go to Hendon on Saturday before a quick chance of revenge when they visit Donkey Lane for a Ryman League Cup Quarter-Final tie next Tuesday.

The Town entertain struggling Brentwood Town at the weekend who will be under the new management of Mike Flanagan following George Borg's exit just prior to Christmas.