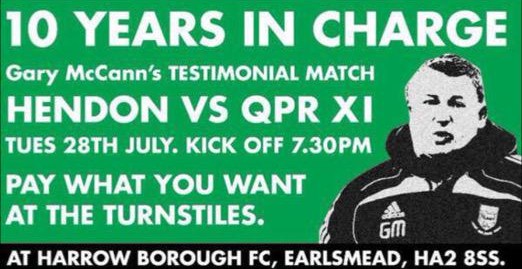 In a era when many mangers come and go it's very rare to see one person in charge of a club for ten years in particular if that club had lost it's ground and been forced to ground share for six of those years.

Gary McCann has been in charge at Hendon since February 2005 after making 196 appearances in goal for the club. The club have finished in 11th, 19th, 14th, 7th, 16th, 10th, 15th, 7th, 10th, 8th and 2nd in the Ryman Premier Division during McCann's reign as boss with last season being his most successful lifting the Ryman League Cup and the London Senior Cup alongside going to so close to promotion in losing to Margate in the play-off final. The club have also qualified for the FA Cup first round proper on two occasions in 2010 losing to Chelmsford City and 2012 losing to Aldershot Town.

The Cold End sends congratulations to Gary and hopes many people attend the game tomorrow at Earlsmead. If your local to the area why not pop along as it's pay what you want at the turnstiles.