INSIDE OR OUTSIDE OF THE BOX? - CUP GLORY FOR ETON MANOR 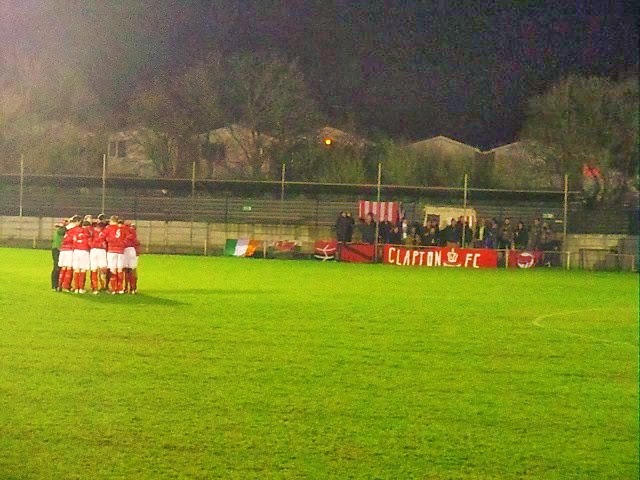 The Clapton Ultras travelled in numbers over to Waltham Abbey last night to watch The Tons Gordon Brasted Memorial Cup game against Eton Manor who currently ground share at Capershotts. The weather was horrible with it being windy and rain pouring down for a good majority of the 90 minutes but that didn't put off the East Londoners who backed their team with some great songs and lots of noise. There were even some South London based Dulwich Hamlet fans who had made the long journey joining in too!

The hosts, who were the better side, had the cup glory on the night and deserved their victory. The talking point of the game was the red card given to The Tons goal keeper when he handled the ball on in the box/on the edge of the box/outside of the box - Have a look on the below video and pictures to see if the referee made the correct decision? From The Cold End's exclusive 'merged' picture it looks like it was just outside the box so the handball did stop a clear goal-scoring opportunity so the man in the middle has to make a hard choice?


The Clapton Ultras and the Friends of Clapton FC have done amazingly well in promoting their historic club as back in November 2011 I was one of just TWELVE people in the same ground watching the Manor face The Tons (link here). This match saw The Tons start with just nine players. The crowd last night was FORTY-FIVE people.

A special mention must go the loyal band of people who support and keep the famous Eton Manor FC name going on some of the lowest crowds (just an average of 23 for league games this season) at this level of football. They face London APSA in the next round of the competition.