Hatfield Town are having a season to forget in the Spartan South Midlands League Premier Division and went into this match with just two wins in their twenty-three league games. The wins had come way back in August at local rival's Hertford Town (2-4) on the opening day of the season and at home to Stotfold (2-1) on Saturday 24th August. Since then their form had read LLLLDLLLLDLLLLLLDDL so a win in this game played on Tuesday night would of been their first in twenty league games. They had won a Challenge Trophy Round One game at Arlesey Town Reserves (2-3) on Wednesday 2nd October which was the last game they won meaning it was sixteen league and cup matches without a win going into this game against Holmer Green.

Holmer Green were on a impressive run of form which had pulled them up into the mid-table positions and away from the relegation zone. They had won just two of their opening thirteen league games but since have won seven of nine games with just one defeat (narrowly 1-2) to title favourite's Hanwell Town.

This game was evenly matched game played on a very heavy Gosling Stadium pitch which is unsurprising with all the heavy rain that has fallen of late. The half-time score was 1-1 with Holmer scoring early and then The Blue Boys equalising just after with a well taken volley from the edge of the six yard box. Hatfield had the best chances in the second half and it looked with around ten minutes left the game would end all square but for an 83rd minute goal from Holmer which took the points for the away side and continued their good run of form. It was cruel blow for the Hatfield Town team who had worked hard on the night and ultimately would get nothing from the game.

After the game it was announced by Hatfield Town they had parted company by mutual consent with Manager Micky Nathan who had been in charge of team affairs for just over one year. The Cold End caught up with him and asked him a few question about his time with the club -

Your thoughts on the game?
I thought the game was tight, both teams were going for the victory. I think that, on the night, we looked the more composed and the team more likely to take the three points only to be caught by a sucker punch at the end. That's how our season has gone so far, no luck at all. I think that we played very well, kept possession well, counter attacked at pace with Adam Murad looking dangerous and Karl Lewis on the wings, Fabian Brown and Charncey Dash up front always looking to cause problems. On another night we score five or six. I could not fault their work rate and desire at all, but we as a team need to be more clinical in front of goal.

How do you feel after leaving the club?
I feel okay. Not great as I would have liked to have left the club in a better position of course. I get on great with the chairman Chris. We have a great relationship. I think he has done wonders for this club and I hope he stays. He gave me a shot when probably no one else would have. I have all my coaching badges but no experience as a manger. So for that I have to thank him. The club is fantastic, it really is, it just needs to get its own clubhouse and ground and it will be set. I know that is what Chris is working towards.

What was the best result why you were with the club?
Personally the first game of this season away to Hertford Town, my old team where I was skipper for two seasons. They are a great club and the fans are very vocal so to go there and win like we did on the opening day of the season was great. But if I was being honest then I would say my first game in charge last season, just taken over, reserves had just folded, chairman on holiday, not won in eighteen matches and we were at home to Ampthill Town FC. We were underdogs... I brought in a few new faces to the side and, bit of experience and we won 3-1. A great game to be a part of and to see the faces of the players in the dressing room after was great.

What next for Micky Nathan? I see you might be pulling your boots back on for Broxbourne Borough?
For me I have no idea, putting my boots back on is a option, although I might need someone to tie my shoelaces up for me. Yes Broxbourne Borough have been in touch, I know the Gaffer Mark Beels very well, I played under him for many years and he is a fantastic coach and first class manager. He has contacted me and asked me to go over and help them as they need to rebuild after what has happened over the last few weeks. It will give me a chance to see some old faces and go back and play where I played many years ago. I have to remember that I am not getting any younger and that my head is saying one thing and legs are saying the completely opposite!!

What next for Hatfield Town?
Hatfield Town FC will see out the season under the guidance of Neil Ewing who is a first class manager and coach. He knows everything to know at this level of football. I am sure with a little bit of luck and a lot of hard work they will be just fine. They have some excellent players and if they stay then every chance that will fight off relegation and stay in the Premier Division for next season. I really hope that they do.

Thanks to Micky for talking to The Cold End and I wish him the best of luck for the future. The Cold End also wishes Hatfield Town the best of luck for the rest of the season. Their scheduled local derby at St Margaretsbury tomorrow afternoon has already been called off due to a waterlogged pitch. Will it ever stop raining? Their next game is due to be played on Tuesday 21st January when they travel to Hanwell Town who I mentioned before a league title favourites. Could they spring a surprise and win against all the odds? 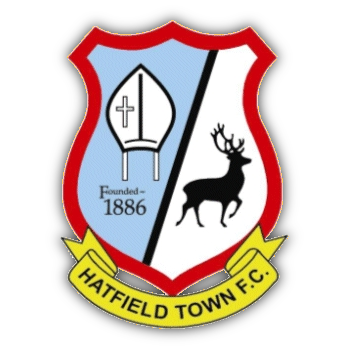