THE GEORGE BORG ERA STARTS WITH A POINT 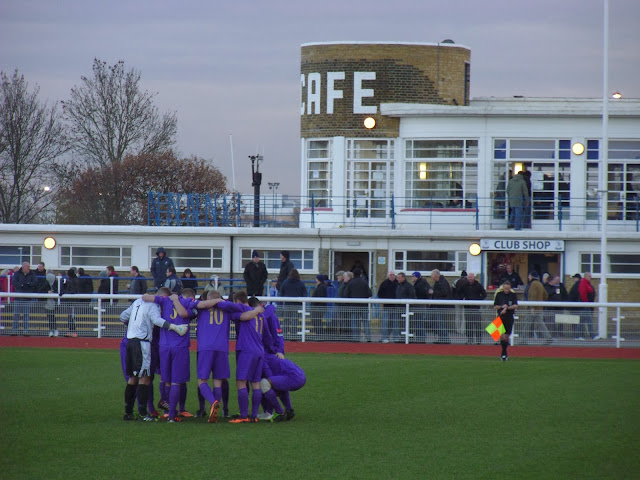 The George Borg era began with a real game of two halves this afternoon at The Queen Elizabeth Stadium. The first half belonged to Town who made a really decent start scoring through Liam Hope and Joe O'Brien who performed one of his trademark dive in the crowd celebrations to mark his goal. Under 21 players Jamie Smyth (at right back) and Ben Ward-Cochrane (playing up front or just behind Liam Hope) started along with new signing Bradley Quinton in midfield who added some much needed energy and experience to Town's engine room.

BWC as he will now be known (in the same mold as AVB or RVP) looks a very useful player - It was his hold up play on the ball that started the move for the second goal. Going in at half time 2-0 up it all looked promising as also Noel Imber in The Town goal hadn't had to make a save of note during the first 45 minutes.

All that was to change in the second half when Carshalton Athletic looked a different team passing the ball around in very impressive style and keeping hold of it for long periods of time. It was no surprise when Kingsley Aikhionbare and Brendan Murphy-McVey made the scoreline 2-2 with two well taken goals. It was Murphy-McVey's first goal in senior football, he has come through the youth ranks at Carshalton.

Town showed some real fighting spirit and came back at the away side. They had two really good chances to take all three points but were tharted by some good saves from the Carshalton goalkeeper Dean Snedker.

Being 2-0 up at half-time and drawing 2-2 will be frustrating but on reflection a point is certainly better than what the Town have been getting recently and George will have learnt a bit more about the players who took part in the game today.

There was some great support for George Borg's Blue and White Army from the Enfield Ultras behind the goal today which was appreciated by the player's and Town's new manager who clapped the fans afterwards which was great to see.