The result went with the form at The Recreation Ground on Saturday afternoon as second placed Belstone beat twelfth placed Knebworth by a scoreline of 0-4. The result puts Belstone on top of the league by a considerable goal difference from Whitwell and Standon & Puckeridge. Some of the +38 goal difference will have come from the 12-0 victory Belstone had over the Mighty K's on Saturday 2nd November. With this in mind the performance from the home team was much improved and lots of positives to come from the game. 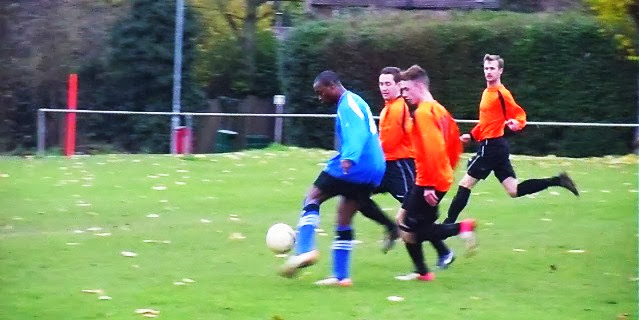 Belstone have a good side this season with many having experience of playing at a higher level such as Lee Inch (Oxhey Jets), Gavin Hart (Northwood) and Lawrence Yaku (Northwood, Hampton and Richmond Borough.

The below table shows how close the race for the title is at present. Knebworth get the chance to end a losing run of six games next weekend when they travel to Hinton who are two points below them in the table. The top three of Belstone, Whitwell and Standon & Puckeridge have yet to play each other yet.

The visitors scored twice in each half with Lawrence Yaku's effort (pictured) the pick of the goals.

Match highlights are below -