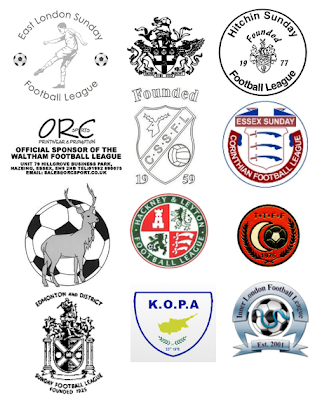 Welcome to week two of THE COLD END SUNDAY MATCH where three games of interest in the local Sunday leagues are highlighted to promote real grass roots football. Only two of last Sunday's games went ahead with the results as follows -

Any game which finishes 5-5 has got to be highly entertaining!

AFC LEXUS v FLAMENGO
ESSEX SUNDAY FOOTBALL COMBINATION DIVISION THREE
VENUE - LOW HALL SPORTS GROUND, E17
Top v Bottom in the table. Lexus who have won all four of their games so far (3-1, 5-0, 7-0 & 6-1) play Flamengo who have lost all three of their games (1-3, 1-8 and 2-6). This could be a real one-sided game or could Flamengo spring a surprise result?

PARKLIFE 'B' V ENFIELD ROYALS
LONDON JUNIOR CUP
VENUE - THE GRIFFIN CLUB, DULWICH, SE21
The Royals are top of Division Three of the Orc Sports Waltham Football League and travel to South London for this London Sunday Junior Cup Second Round Tie. Their games have been full of goals with 7-5, 2-1 and 8-2 victories. Parklife 'B' play in the Sportsman's Sunday Football League Division One. They have played two games so far losing 4-1 to AFC Maverick and 2-0 versus Clapham Rovers 'A'. This should be a really interesting South v North Cup tie!

LEYTON MANOR V LEYTON ORIENT FANS
HACKNEY AND LEYTON LEAGUE DIVISION FOUR
VENUE - HACKNEY SOUTH MARSH
The big Leyton derby as Manor take on The O's supporter's team. For The O's whose fans are in dreamland at the moment it hasn't been as good on Sunday mornings with a 2-2 draw and a 3-2 defeat so far. Manor have won one game against Bow Badgers (0-2) and lost the other two games they have played against Boston Celtic (0-6) and FC Haggerston (4-3).