THE UNDER 2.5 GOALS GENERATOR 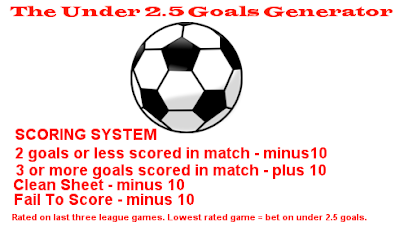 Regular readers will know TheColdEnd is a hopeless gambler and over the past few weeks I have brought back what was called THE BTTS SYSTEM which predicted (only sometimes) which teams would be involved in games where Both Teams score. This wasn't working so I've had a re-think and can now present to you the more simple under 2.5 goals generator. For me, the golden rule in gambling is keep it simple. By having one bet on on a specific Blue Square Premier game each week we'll see how we go. The lowest rated = the game to bet on. Here are the fixtures for tomorrow and ratings:

TheColdEnd will now run this system until the end of the season and then review in the summer. Let's hope we bash the bookies at last!!