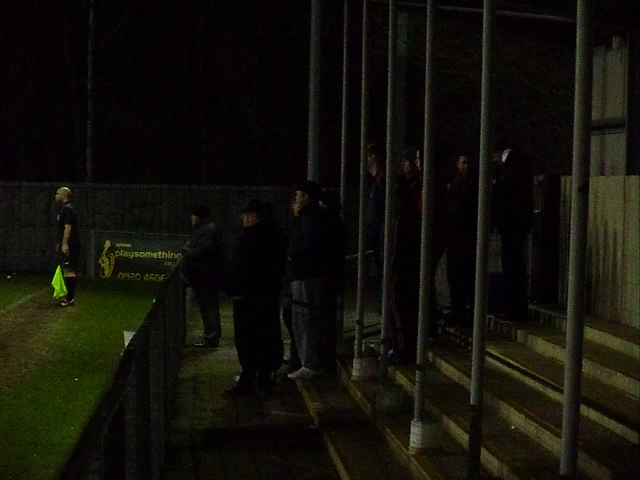 On Tuesday afternoon Harlow Town failed in their Football Association appeal against a ten point league deduction for breaching a Ryman League rule. A brief explanation is that the club failed to notify the league of an amendment to their original Company Voluntary Arrangement (CVA) agreement.

The hammer blow of the loss of ten points pulled The Hawks down towards the one relegation place that Ware, Redbridge and Ilford are fighting to stay out of. 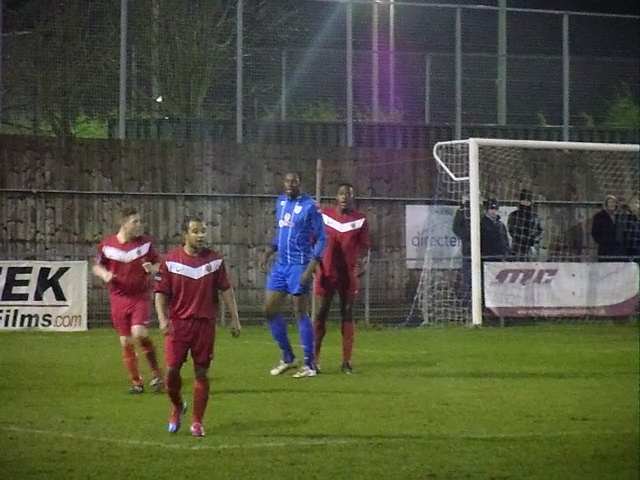 This put some added tension and interest into the game against Ware at Wodson Park which took place on Tuesday evening. The game had been played on Boxing Day but had been abandoned on 72 minutes due to a waterlogged pitch with the home side 4-2 up. Hats must go off to Ware who offered reduced £5 for adults admission for this game.

On a surface that was sticky and muddy with some patches of grass present both sides worked hard but failed really to create any clear cut chances in the first period. The Hawks had a long range shot from Ben Hart which sailed over the cross bar with Ware making a break through when ex Harlow player Jon Stevenson headed a corner back across goal for Louis Rose to tap the ball into the net.

Both sides looked incredibly narrow in midfield and were crying out for some width. At half time it was my thought that if Harlow had moved right sided Ben Hart, a recent signing from Hoddeson Town, across about 10-15 metres it would stretched the Ware back line more and he could of really tested their left back with his pacey runs.


Both sides played long balls with Ware number 9 Leon Simpson (a recent signing from Evo Stik Southern Premier Division Banbury United) winning most of the headers put his way. The fact he is 6ft 9inches tall helped but it has to be said he was also good with the ball at his feet.

It got worse for Harlow early in the second half when Stevenson smashed a spot-kick into the net to make it 2-0. It was certainly a very eventful evening for the ex Enfield Town player.

Shortly after it was 2-1 when a cross-cum-shot from Hart looped over Kwame Fordah in the Ware goal.

Harlow made it 2-2 when Stevenson was rather harshly adjudged to have pushed Chuck Duru just inside the box. With no away player appealing for a penalty the referee give it and Stevo was booked for descent afterwards. (see the video on 10 mins 40secs to make your own opinion) 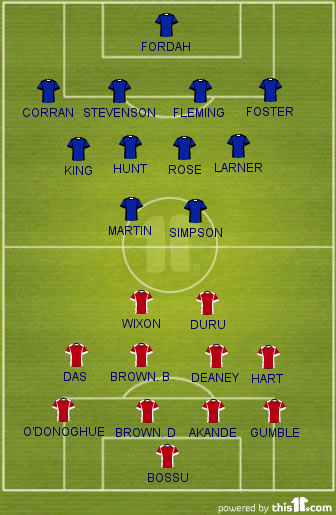 With game drifting towards a score draw Stevo was once again involved when he was adjudged to have pushed Duru again who was running onto a through ball (see from 15m 50secs to make your opinion). Brown capped off a great performance by stepping up and this time sent the keeper the wrong way to make 2-3 with only minutes left to seal the all important three points and a morale boosting victory for The Hawks.

Although a very welcome win for Harlow Town it's still extremely tight at the bottom of the table now they have the points deduction and despite working hard throughout the game two of their goals were scored from penalty kicks and the other was a lucky cross-cum-shot effort. Other than that they didn't really trouble Fordah in the Ware goal. With Ilford gaining a point in a 3-3 draw at home to Cheshunt on Wednesday it really looks like it's going to go right down to the wire as to who finishes bottom.

I think Ware will be just about okay. In Leon Simpson they have signed a decent centre forward who will cause any defence problems with his height. TheColdEnd thinks they need a decent pacey wide player who can deliver the crosses for Simpson to get on the end of.