THE EAGLES WIN AT SANDRIDGE

Yesterday evening saw Letchworth Garden City Eagles visit Sandridge Rovers in the Hertfordshire Senior County League Premier Division. Rovers play at the Spencer Recreation Ground in the village just to the North of St Albans and despite the rain that has been bucketing down over the last few days the weather held out for the game and the sun even shone through at times making it a really nice early evening to watch football. The ground also doubles as the cricket field for the village and the groundsman was busy rolling the square, in preparation for the forthcoming season, throughout the match as you can here on parts of the video. 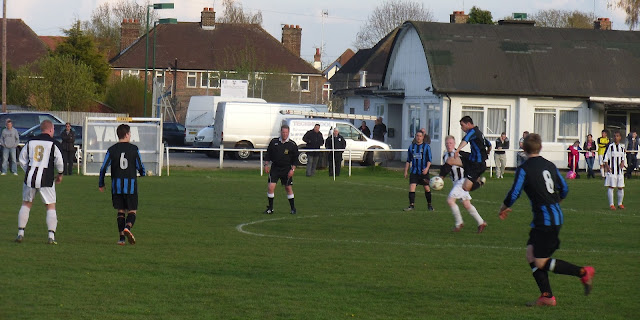 Both sides were in decent form going into the game which kicked off at 6.30pm with Sandridge Rovers winning four of their previous six league games including a 0-3 victory at Pixmore against the Eagles. The visitors had won 3, drawn 1 and lost 2 of their last six league games but also got through to the Aubery Cup final with a narrow 1-2 victory at Wormley Rovers.  It was 10th versus 6th in the table and it turned out to be a closely fought entertaining game. Highlights are below including all five goals that were scored (one of them nearly caught me out after a quickly taken free kick as you'll see). 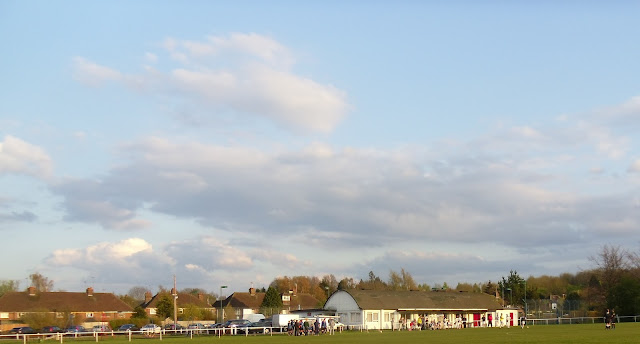 The Eagles, as well as the Aubery final on Bank Holiday Monday 7th May, have an interesting fixture next Tuesday 1st May when they travel a short distance to play Premier Division champion's Baldock Town.

Rovers have one league game left on that same day when they go to Metropolitan Police Bushey whom are the Eagles opponents in the big Bank Holiday final.