Enfield Town comprehensively outplayed an Ilford side struggling at the wrong end of the table with the final score of 5-0 being kept down by a number of good saves from The Foxes goalkeeper Rob Budd.

On a damp and overcast day Town's attacking play shone against an Ilford side who will probably want to forget about their first trip to the Queen Elizabeth Stadium.

The Foxes relied on their wingers Shane Stamp (on the left) and Daniel Abioye (on the right) on the rare occasions they did break forward. Both showed some good touches with Stamp (whom started the season with Redbridge) showing some good skill and trickery.

Once Leon Osei (who had a great game having a hand in a number of the goals) struck on 16 minutes it looked as though their would be only one winner with a Liam Hope penalty (slightly harsh on the Ilford defender??? - Have a check on the video from 3mins 40secs) and a fantastic strike by Michael Ewang making it 3-0 by half-time. Ewang's goal came after an impressive 'total football' passing move by the Town players.

Liam added to his tally in the second half along with substitute Tyler Campbell notching his first goal for the Town. Liam's brace puts him top of the Ryman Division One (North) golden boot chart on 22 league goals so far this season. He is closely followed by Sam Newson (Needham Market) and Tilbury's Alex Read (who also got two goals yesterday) who are both on 21 league goals.

Lee Allen, playing just in front of the back four, had a fantastic game and his performance probably just about shaded the cold end's man of the match award.

Town are still four points behind table-toppers Leiston who were run close by a strong performance from Waltham Abbey with the final score being 2-1 at Victory Road. Leiston's next game is away to Ilford at Cricklefields next Saturday with Enfield Town making the trip to Maldon and Tiptree. More on the league table later in the week.
﻿
STARTING FORMATIONS 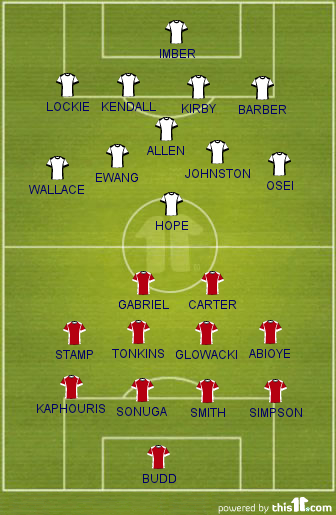 
Photos courtesy of Tom Scott. For more brilliant images of the match and other Enfield Town matches please click on his flickr stream here
at 20:59