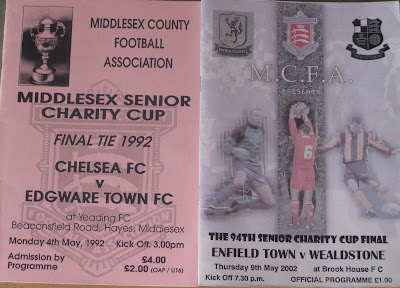 One final game of the season takes place tonight, when Enfield Town take on Combined Counties Premier Division winners North Greenford United who we may well be facing in the Ryman Division One (North) next season should they be placed in our league upon promotion to the higher level.

Town are actually holders of the Trophy having won the 07/08 competition against Hillingdon Borough 4-1 AET on the 12th Augsut 2008. Luke Marshall got a hat-trick with Glen Harvey getting the other one for Town in front of a massive crowd of 138 people. Last season's (08/09) competition was scrapped.

The competition has a rich history having first been played in 1901/02 when Clapton Orient lifted the silverware beating Ealing 1-0 in the final. Some familiar names have lifted the trophy such as Barnet in 1925 and 1927, the old Enfield FC on numerous occasions. In 1910 the E's won the final 2-1 agianst the 2nd Battalion Coldstream Guards. During the 2nd World War years the competition was played as 'the Senior Red Cross Cup' during which time Queens Park Rangers got to the final only to be beaten by Tufnell Park 3-2.

In the late 80's and early 90's even Chelsea entered a team winning the trophy three times in 1989 against Kingsbury Town, 1990 against Hampton and 1992 against Edgware Town. Their team line up in the programme for the 1992 final included Kevin Hitchcock, Frank Sinclair, Craig Burley, Alan Dickens and Neil Shipperley along with Dave Beasant who was playing against his old club is Edgware Town who included Town's very own Steve Newing in their line up in the programme.

The 1987/88 competition was sponsored by famous astrologer and Middlesex football supporter Russell Grant, the final was played at Wembley Stadium between two local rival teams who play in the shadow of the national stadium in Hendon and Wembley. The Greens were victorious against The Lions by 2 goals to nil.

The next season's competition was the first where Chelsea had competed and the final was played at Stamdord Bridge with Kingsbury Town going down 4-0. 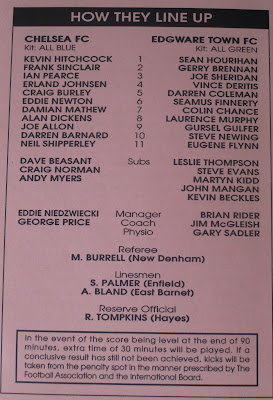 Town famously lifted the Trophy in our first season beating Wealdstone on penalties on the 9th May 2002 played on Brook House's wonderful pitch, which at the time was rumoured to be the best playing surface in the county. 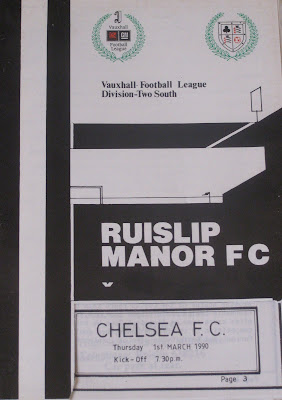 Above - Ruislip Manor (then of the Isthmian Division Two South) entertained Chelsea as Grosvenor Vale in the 1990 competition. Chelsea listed Graeme Le Saux and Jason Cundy in their side. Chelsea no longer enter the competition. With all the Champions League football to contend with I can't see Drogba, Lampard, Terry and Co turning out in a midweek fixture at a Ryman League side.

North Greenford United are sure to be wanting to complete a league and cup 'double' tonight in what's bound to be another eventful game. They have had a tremendous season having only lost once in the league since the 1st January (Guildford City 3-1 away on the 6th March). Their top scorer in league and cup competitions is Dave Lawrence who has hit the back of the net an amazing 41 times in 45 games.

The game takes place at Hampton & Richmond Borough's Beveree Ground and kicks off at 7.30pm.
at 07:03