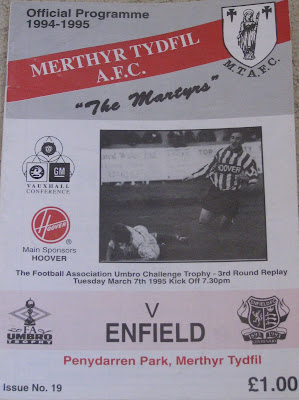 Paul Hobson's 80th minute own goal in the the FA Trophy 3rd round match on the 4th March 1995 caused a mini pitch invasion by the Merthyr Tydfil supporters at the Town End and made this classic away day to happen a few days later on the 7th March. It was Enfield's second trip to Wales that season as we had played and beaten Colwyn Bay in the previous round.
Enfield FC were riding high in the then Diadora League Premier Division in 2nd place heading for the Championship title. The Welsh side were one league higher but struggling in the Conference in 20th place (out of 22) but had previous to the 1-1 draw at Southbury Road gained a respectable 2-2 draw at 5th placed Halifax Town.
It was a early meet for the midweek trip over the Severn Bridge and into the picturesque Valley's of Wales. The coach left the Stadium and made it's way along the M4 and then a right along the A465 to arrive in Merthyr Tydfil at about 5pm if I remember rightly. We had two hours to waste in the Town centre and we were hungry and thirsty so we headed for the nearest takeaway which was the brilliant "Burger Master" and then onto a watering hole for a few pre-match beers. 20p for a game of pool was a bargain!! How much is it now in London to play one game??
All through the day it was quite nice weather-wise, We didn't have one clue as to what was going to occur later in the evening.
Penydarren Park is a fantastic ground and at the time was probably one of the best in the non-league game with stands on three sides. Playing in our changed purple kit The E's attacked the uncovered end for the first half, Paul Hobson had been dropped to the bench in favour of Johnny Richardson, maybe for scoring the own goal which caused this mammoth midweek trip. Most of the travelling Enfield fans positioned ourselves high on the big terrace to watch George Borg's blue and white army hopefully cause a upset against a Conference side.
The legend and then Enfield FC manager called us "Snowmen" and "magnificent" stating if we cut ourselves we'd bleed blue and white in his next programme notes which was a great touch.
It's fair to say the pitch was not conducive to free flowing one touch soccer with not much grass visible in the centre area making for a scrappy game but after 9 minutes this was all forgotten when Gary Abbott scored right in front of us and the shock was on.
The notoriously passionate and vociferous supporters at Penydarren Park made for a somewhat hostile atmosphere by voicing their disapproval when one of their players was carried off injured after a innocuous looking challenge with Super Gary Blackford. The 3rd of their players to be injured as Andy Beattie and Mark Williams had been taken off at Southbury Road.
The half-time break came and totally out of the blue it started snowing!!!! It continued and after 5 minutes all we could do was sing 'Orange, Orange, Orange ball...Orange ball...Orange Ball" over and over again at the novelty of playing with a different coloured ball which had been thrown on as the snow was settling worryingly rather quickly. It wasn't letting up at all and it was rapidly descending into blizzard conditions.
It was then a few snowballs were exchanged in an impromptu international snowball fight between the Welsh and English fans and vice-versa. The cold end stocked up reserves by filling a large traffic cone up with fresh snow and random snowball's were thrown to and from throughout the 2nd half.
The E's struggled in the snowy conditions and not against the run of play Merthyr equalised. Another Martyr's player was stretchered off following a 50/50 challenge from Martin St Hilaire that in no way was over the top in any circumstances. The home fan's didn't appear to think so and proceeded to boo The Saint who was never a dirty player whenever he touched the ball.
The snow continued and it was no surprise when after 81 minutes the game was called off much the annoyance of George Borg. 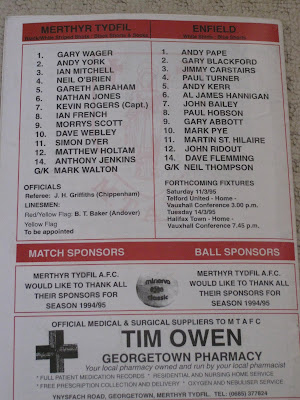 After the game the supporter's coach struggled in the conditions and the road's around Merthyr, getting stuck on a very tight corner trying to get away from the ground. A load of us had to push the coach out of the now thick snow trying to avoid being hit by snowballs from some of the locals. Eventually we got going and the snow cleared as we drove towards England. The cold end got home at about 3am and was up for work at 7am the next morning. Great days!!
I wasn't one of the hardcore who returned to Wales the next Monday and saw England's number one Andy Pape put on a super show in the E's shock 0-1 win.
Looking back on the 94/95 season it is by far the best season I had following the E's from starting supporting back in 1987. I've already written about the classic trips to Torquay United and Bromsgrove Rovers with so many more in that Championship season.
The crowd's at Southbury Road that season were fantastic too... 772 versus Aylesbury United, 1,132 versus Slough Town, 1,185 versus St Albans City, 864 versus Hitchin Town and 1,458 versus Bishop's Stortford to name a few. Where have all these supporters gone?? They are not currently supporting the two new clubs Enfield Town (formed in 2001) and Enfield FC 1893 (formed in 2007).... Lets hope some see the potential of a glory and return for the playoff game(hopefully games) next week.
MERTHYR TYDFIL NOW SET TO RE-FORM IN THE SUMMER
Merthyr Tydfil have been suffering widely reported and big financial problems this season. They have been deducted 10 points for going into administration and are battling to stay out of the drop zone in the Zamaretto Premier.
The club have decided to reform in the Summer and play in the Western League Premier Division if they finish out of the relegation zone and Division One if they finish in the dreaded drop section. They are currently one point below Bedford Town and two points below Tiverton Town who sit outside the relegation zone. Their last two games at home to Brackley Town on Tuesday and away to Swindon Supermarine will determine if they are to face trips to Welton Rovers, Bitton, Bristol Manor Farm amongst others in the Premier Division or Cadbury Heath, Gillingham Town and Odd Down in Division One. I'm sure whichever division they play in next season the club's of the Western League will welcome the large number of Martyr's fans to their grounds and club bars.
The "new" club is thought to be named simply Merthyr Tydfil AFC 2010.
at 19:52