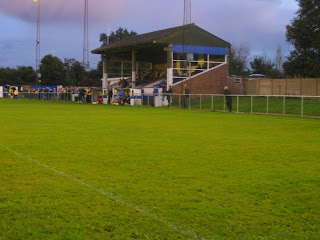 The cold end can't resist the magic of the FA Cup so made a trip to Hertingfordbury Park where Hoddesdon Town entertained Royston Town tonight. In the hour leading up to the match there was down pour of rain and some thunder and lighting thrown in to the mix but luckily the weather cleared and as the match began there were nice conditions to play in with a rainbow forming over the stable end of the ground. 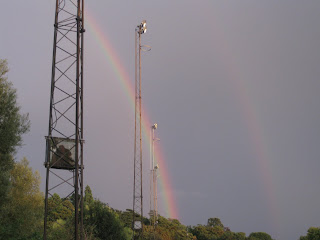 The first half was a very tight affair with Hoddesdon's front two of Lee Tombs and Richard Howard working hard but unable to create no real clear cut chances. The Crows had the better chances forcing a good save from Allan Buck in the Hoddy goal before taking the lead when Luke Robins scored with a well taken shot from about 6 yards out which Buck had no chance of saving. 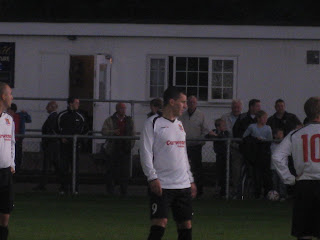 Hoddesdon's best chance came when a cross came in from the right which was cleared close to the line by Royston's Jamie Babbage.

The Crow's went in 1-0 up at the break in what was a pretty level half of football.

Hoddy piled on the pressure in the 2nd Half with a header from a free kick from the right unluckily flying past the far post and Richard Howard working hard but still not having a clear cut chance.

Royston's defence held firm with Ryan Wade and Luke Robins looking good on the break. Wade looped a shot just wide from the left hand side.

Hoddesdon were very unlucky not to get anything from the game giving it 100% but just couldn't get a decent shot on goal.

Royston should of scored with a late header which went just over the bar.


In the end it was Royston who found the £1500 pot of gold at the end of the rainbow making it through to the 1st Qualifying Round.

The cold end thought Brian Okwera at the back for Hoddesdon was a good player and looked very composed when on the ball.